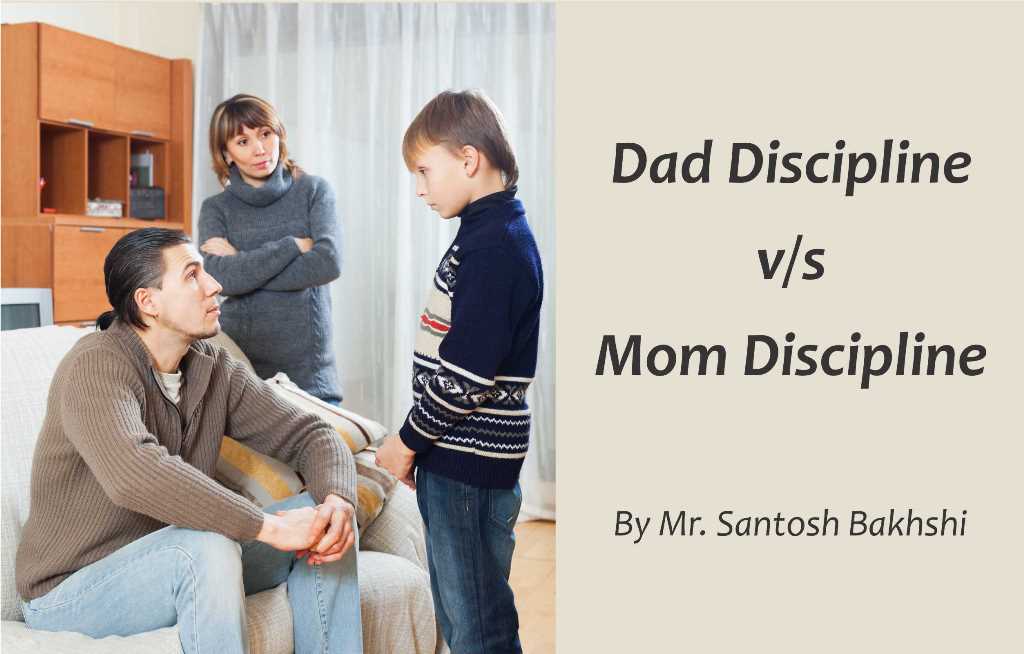 A Topic Seldom discussed by Parents!

Back in my childhood, Dad worked from 10 am to midnight. Mom was the ‘YellBox’ and when yelling didn’t work, she was the Chhittar Champion Rani, always ranking 1st in society. But when even that failed to work. — “Papa ko aane do, Daant padegi tab seedha hoga”. was the Final Warning – An Indian Patent Disciplinary Sentence proudly used for years by Indian Mothers .

This was the Final Frontier in Discipline and then Dad walked into the scene. Dad just had a look that was accompanied by deafening silence. That look meant “Feel my power”!

Is it the same today? is there a difference between Mother and Father Discipline? Should there be a difference and how does it account for? Researchers suggest that Father and Mother discipline do differ. This has been now noted and in an unpredictable way. The indication is that children are more immediately influenced by their mothers, but that as they grow older, their father’s disciplinary practices through the years are deeply correlated with their social behavior.

“Father Effect” as it is called, a difficult topic to be discussed in most Indian Households. Having discussed this topic with many Dads I have been astonished to know that the Dads are awkward to discuss this, Yes, even the CEO DAD!

Physical contact, nurturing, reassurance – remains difficult or not expressed much.

As each day unfolds with more uncertainties for a family today, compared to the ‘Certainty chart’ of family routine and behavior being followed upto early 2000, The traditional father as the head of the home now does not carry the acceptance as it once did. Say Researches. Modern dads might yell or be distant, but that’s no longer accepted as a norm. Children today have a substantively different concept of what a father’s role is supposed to be.

For example, it has come to light after many kinds of research, over changing times and after analyzing different cultures, that, Mothers tend to discipline kids more because they care about their social relationship with their child. That’s why mothers are more likely to take misbehavior personally and in return of which, kids are primed to react more emotionally. Dads are diagonally different here, they tend to discipline because they want their children to grow up to do well in the world and not get denied opportunities. In other words, the impact of paternal discipline may show up later in life because that’s actually the intent.

Thus, Rejection from fathers today contributes to adolescent wariness in social situations in ways that other family relationships do not. Whether harsh and rejecting or empathetic and nurturing, the scientific consensus is that dad discipline does have a substantive impact which is Slow and reflected upon when the child grows up and is out there on her/his own.

This difference is very important to be understood by the Parents themselves.

Most of the misery for the child lies in the fact that each parent wants the other parent to discipline the child, as they do. A very close family member enlightened me on this aspect recently. She stated it beautifully,

“Ishan has me as a Mother, he is served food at the table and the dining time is set at 45 mins. Post which the Table is cleared.

Ishan has his Father, who ensures Ishan finishes the meal and scrubs the utensils clean”.

Ishan respects both disciplines as the parents don’t fight about which is the correct discipline. Ishan has learned over time to ensure the meal is consumed within 45mins of being served and the utensils to be cleaned as well.

While the above example might not be the ideal common platform of discipline to be followed by all parents, it does give us an understanding that the parents need to first respect their individualities in how they discipline the child because for the child, Both Disciplines are essential!

We need both disciplines in life!